My dissertation research included ethnographic work on N. Williams Ave. I revisit often. My most recent visit this week revealed yet another jarring tour of how rapidly this street is isolating and then removing longstanding, people of color-owned businesses and their clientele. 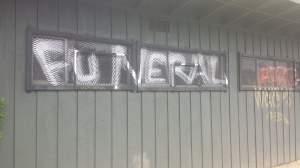 Bicycle infrastructure does not exist in an urban vacuum. Every stripe of white paint or paved railroad has social context. This I know from my quest to understand why some residents are reluctant/resistant to support particular types of bicycle planning. Specifically, those who highlight historical class, racial, ethnic, and cultural disparities as reasons to fight against a bike lane.

A few years ago, the Albina neighborhood was the site of a very public debate about how bicycle infrastructure and gentrification are linked. (white) Bicycle advocates struggled to see the link, but longtime African American residents knew what was about to happen. It was merely a predictable cycle.

The City of Portland ignored/disinvested from N. Williams Ave. for a long time. For many decades, Black businesses thrived. Then when developers and the City got antsy about “cleaning up” the area, the businesses and nearby residents disappeared at varying speeds.

This is what remains.

Construction across the street from New Seasons

Graffiti in context of development on N. Williams Ave. 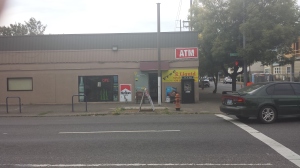 This bodega and conjoined Ethiopian restaurant being forced out

Backside of building with bodega and Ethiopian restaurant. Not confirmed, but assumed to be closing as well. 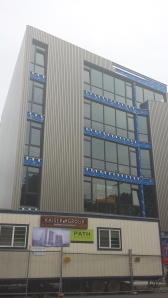 The site of LV’s, one of the last Black owned businesses on Vancouver (parallel to Williams)

A few weeks ago, Bike Portland, ran an article titled “‘Rider Appreciation Day’ shows business support for cycling on Williams Ave.” The article begins, “What often gets lost in emotional planning meetings and divisive media headlines is that, in reality, many business owners in Portland not only support bicycling, they embrace and encourage it. Nowhere was that more evident than last night’s Rider Appreciation Day on N Williams Ave.”

The editor of the site did not approve my comment to be posted about this article, but I did not have such a positive reaction to this appreciation event. “In reality” of course businesses support bicycling in Portland. There is ample evidence that shows that bicycling increases the foot traffic of business districts. Moreover, the businesses featured during the Appreciation Day included a wine bar, a high-end “sustainable” Mexican restaurant, and a bar that already caters to bicyclists. It is a no-brainer that these businesses already support the upwardly mobile, white bicyclists that appeared to dominate the street-level event.

The few older businesses owned by people of color that managed to stay open during this hyper-gentrification era on N. Williams Ave. are were not present. That is because most of them are closed or being bought out: Tropicana, LV’s (on Vancouver), and Dalo’s Kitchen (Ethiopian). (These links are to stories of their closings)

Even though the article’s lead vaguely suggests that there has been some sort of debate about whether businesses support bicyclists, I am unfamiliar with this debate. In fact, the businesses that would potentially not support cyclists are now gone. What gets lost in the “Appreciation Day” is that the emotions the article references are rooted in decades of class and race-based displacement. Hip, white bicyclists already know they are appreciated. This is made extremely clear on N. Williams Ave. This Appreciation Day was a slick marketing and public relations campaign to show that everything is just fine on N. Williams Ave. And everything is not fine. To quote my friend who stumbled upon the street by accident, “this looks like a crime scene.”