From 9 p.m. on August 24 to 6 a.m. on August 25, I participated in an amazing bicycle ride, simply titled “Dark to Dawn: A Bicycling Journey.”

“Amazing” is perhaps an understatement. To commemorate the 50th anniversary of the March on Washington, four local bicycle organizations organized a ride around Minneapolis and St. Paul, to highlight places where African Americans once thrived, continue to thrive, were terrorized by white populations, and/or fought back against racism and classism in the name of civil rights.  The ride was creative, sobering, educational, fun, humbling and joyful. I could not have asked for a better bicycle ride.

Members of the Major Taylor Bicycling Club of Minnesota led a group of 35 cyclists through the dark streets for 9 hours. Throughout the planned route, members of the club stopped us and explained the importance of where we were. As someone interested in neighborhoods, communities, and how space means different things to different people, I found every stop full of fascinating information. Sometimes, the members had personal connections to the stops and explained their history to the space. Louis Moore showed us his house and told his story about being the first Black family to move into the neighborhood. Seitu Jones showed us a lot of the public art projects he has done throughout the cities. Most recently he did some excellent artwork on the just-opened Van White Bridge. On the Bassett’s Creek Trail he constructed a “Fair Housing” piece built into a bridge over the water. In fact, he has done so much artwork throughout Minneapolis that one rider exclaimed, “are there any other artists in Minneapolis?” Seitu’s commitment to political, public art is commendable and I am so grateful to be given the opportunity to meet him and see (only some of) his work.

Seitu’s stained glass work is in this church, but it was too dark to see.

I rode many miles next to Anthony Taylor, a member of Major Taylor (and co-host of a great show, “Day One,” on KMOJ) as we discussed the necessity in seeing the cities not just as they are now but what they once contained. For example, the ride took us to Heritage Park apartments in North Minneapolis—a wide swath of new, modern apartment complexes. But what stood there before was Minneapolis’s largest housing project. Another stop landed us at an empty lot on 38th St & 4th Ave. South, where ride leaders spoke to us about how the corridor used to be a booming Black business district. During this stop, Anthony brought up the issue of how gentrification impacts Black communities and had us start to think through how bicycle amenities may have a serious role in the gentrification process. Anthony and I rode away from the stop together engaging in a thoughtful discussion about the role of food co-ops in poor neighborhoods and our country’s economic relationship to healthy food.

The Lee House’s placard detailing the riots that ensued when the Lee family moved in, in the 1910s.

During other times, I rode along with other bicyclists, chit chatting about our current projects in life and future goals. Everyone was genuinely interested in each other, why they chose to partake in this ride, and how all of how own community activism melds together.  As a white woman who has participated in endless bicycle events put on by white people, it was clear from the beginning how different this event would be. I actually felt comfortable and welcomed during the entire ride. Men often find a way to make anything a competition and yet somehow the “slow ride” energy maintained itself the entire time. The only time the group broke up momentarily was at stop lights and at the end of the ride when people could not wait to get to (the fanciest post-bike ride) breakfast and high tailed it back to the Cultural Wellness Center in Minneapolis from downtown St. Paul (a 15 miles ride!). 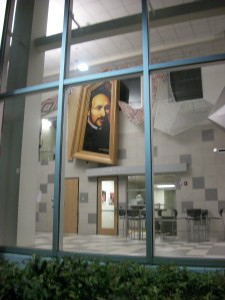 To be blunt, it is no surprise that a ride organized largely by not white men (NWM) turned out to be welcoming to everyone. Walter, the ride’s official leader, mentioned to me at breakfast that the ride was majority women. White men were the very small minority on the ride. No one wonder I felt so comfortable. In the bicycle advocacy world so many people are concerned about how to get more NWM biking. Perhaps we can look to rides like Dark to Dawn and think through why this ride was as diverse as it was. Why did women feel comfortable doing something as crazy as riding overnight? (When, apparently, we are too scared to ride in the streets) Why were white men in the minority?

In closing, I cannot thank the organizers enough for such a fantastic ride. Being able to hang out with members of Major Taylor (the sweetest, coolest people ever—seriously) has gotten me to rethink what is going on in the bike world in Minneapolis. If you too would like to do some brain rewiring, I invite you to attend either of these events:

Every Wednesday at 6:30, meet at Freewheel on the Greenway (under 11th Ave S.)

A  list of stops on the Dark to Dawn ride:

Plymouth Avenue, the only remaining storefront left after 1968 riot and white flight are

8 thoughts on “Dark to Dawn: A reflection”