…and then I talk about gay politics in hip hop. ((I am desperately trying to keep this blog focused on my dissertation, but sometimes I need this space to share something else…))

First: Thank you Surly for your awesome ad!

A few days ago, a woman posted this Surly ad on a feminist bike forum. She found it, as I did, in the 2012 winter issue of Bust. 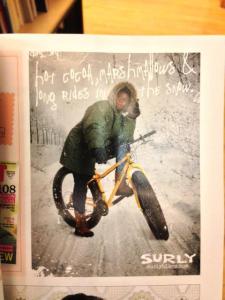 Surly is a Minnesota-based bicycle company that makes sturdy bikes for taking long bike trips, commuting, and winter biking. This ad features one of their “fat tire” bikes that make it really easy to bike in the snow (So I have been told). These bikes, though, run at least $2,000. Overall, this company makes excellent bikes and is a highly respected company not only in the bike business but also around the Twin Cities.

Surly maintains its reputation here because this advertisement is amazing!!!–especially considering its place in an otherwise sexist, racist, and classist industry.

Why it is amazing:

1. It features a person of color! Do you know how many bicycle ads feature people of color? Well I do not know either because I do not enjoy counting ads, but I can tell you it is not very many. People of color are severely underrepresented in every facet of bicycle culture—from bike shop employees to sitting on boards determining new bicycle infrastructure. And then people ask, “why do not we see more people of color bike!?” Huh.

2. It features a gender neutral person! Is this a man or woman? Who cares! They love to bike! And whoever it is, they are not sexualized. This is important because this ad ran in Bust—a feminist pop culture magazine, with a mostly woman-identified audience. So we could assume this person is a woman, as it would be kind of pointless to have yet another bicycle ad with a cisgender man featured—especially in a feminist magazine. Women are overly sexualized in the bicycle world—a world in which you would think that sexualizing women would be kind of, I do not know, stupid?! But no, it happens. A lot. (So much so, that a bicycle advocate created the Bike Test to check for sexist representations)

So thank you Surly for not sexualizing this person!

3. This otherwise marginalized body is biking in the winter! A lot of coverage of bicycle commuting, especially in the winter, loves to feature white dudes. Do you have a beard? Oh you certainly will be featured because your icy beard is just so silly! So it is great of Surly show that anyone can bicycle in the winter. Of course my only critique is that this bike is that it is hella expensive and a bike that only the seasoned commuter would consider buying. Most of the people I see riding this bike in Minneapolis (I’d assume the top place to spot this thing) are white people, mostly men.

4. They ran an advertisement in Bust! Supporting feminist publications is perhaps one of the few political things advertisers can do. Righteous.

If you would like to let Surly know how much you appreciate this progressive, positive, kick ass ad you can drop them a note here: derby@surlybikes.com

Of course, we can think about how sad it is that a bicycle company is celebrated for putting a non-sexualized, person of color in its advertising, somewhat hiding in a feminist magazine. We should be way pass this because it is—oh look at that—almost 2013. But, you know, baby steps.

And now, to go off topic from my dissertation:

We need a Black, gay, mainstream hip hop artist if shit is going to change.

This semester I had pointed and exceptional conversations with my students about gay marriage. I teach in Minnesota where voters in November declined an amendment that would have banned gay marriage in our state.

In light of our class discussions, one of my students sent me Macklemore’s “Same Love” video. I screened it in class. I had never heard of Macklemore and when I asked my students if they knew of him, they all looked at me incredulously. “Of course we know him, duh, Melody” they said, although it came out as grumbles at 8: 15 am.

The video features a person of color who is struggling with his sexuality. The song’s message is one of equality and love and Macklemore raps such biting commentary as, “if I was gay, I would think hip hop hates me.” Someone said it, finally. To be pro-gay rights in the hip hop world runs the risk of career suicide and I was both surprised and happy to know that he was popular among my students.

And then I found out he was white.

During our class discussion about “Same Love,” I asked the class if they knew who Frank Ocean was. “Yes, of course we do, Melody.” (Gawd, I am, like, so old!) Frank Ocean, a Black hip hop artist and producer, made headlines earlier this year with a tumblr post about his unrequited love for another man. His album, Channel Orange, was released the same week. And to my shock, he chose to perform “Bad Religion” on his first televised appearance—a track that is most explicit about his love for another man: “I can never make him love me, never make him love me.”  Other songs on the album discuss his lust and love for women.

Ocean refuses to identify himself as anything, sexually. When GQ asked him if he was bisexual, he responded in part: “I’m giving you my experiences. But just take what I give you. You ain’t got to pry beyond that. I’m giving you what I feel like you can feel. The other shit, you can’t feel. You can’t feel a box. You can’t feel a label. Don’t get caught up in that shit. There’s so much something in life. Don’t get caught up in the nothing. That shit is nothing, you know? It’s nothing. Vanish the fear.”

Frank Ocean’s sexual identity is complicated, as most people’s sexuality is, but he is not entirely threatening in that he still loves women and he refuses to identity as queer. He has no obligation to identity as anything, but the lack of connection to queerness allows listeners to grasp on to his heterosexualness.

So what we have is: a straight, white rapper highly respected for supporting gay rights and a Black artist who is partially shunned by an audience who would otherwise love his music (for one, his album is critically acclaimed). Both artists have impressive albums in that they never result to objectifying women–a huge feat in hip hop. They also make really smart music. Macklemore, although not from Minneapolis, finds great success in the city because of our local hip hop scene filled with intelligent, political artists (Dessa, Atmosphere, Brother Ali).

I think there is a reason Macklemore does not run into more trouble: he is a straight, white, handsome man. Young, straight, white people are hugely supportive of gay rights. In fact, this demographic has been credited with turning the public opinion tide (and resulting election results) about gay marriage. Macklemore’s support of gay marriage is normalized through his race and sexuality. He has laid important groundwork in an industry that still refuses to accept gay people—especially gay men of color. But he gets to do this because of his white privilege.

Frank Ocean struggles more. His queerness makes people really uncomfortable. It does not mesh with our visions of hip hop. Black people are the ones dropping the f-word all the time, so why is he suggesting that he is a f-word?

As I listened to “Same Love” last night, I filled with rage and sadness and I thought to myself, “we need a Black gay hip hop artist…now.”

I believe that if we are going to banish the homophobia and hatred embedded in mainstream hip hop, then we need a role model. Somebody has to come out. Be normatively gay, that is fine. But be gay. And rap about it. And embody it. Because otherwise, Macklemore’s insights about the homophobic hip hip industry are going to continue. The youth are undeniably supportive of gay people and it is now or never that we capitalize on that. Frank Ocean is helping, Macklemore is helping. But we need to drop a serious bomb on the industry before the hate-filled ideology digs its nails even deeper into a music genre that has so much potential to change.

“Man, that’s gay” gets dropped on the daily. We become so numb to what we’re saying. A culture founded from oppression. Yet we don’t have acceptance for ‘em. Call each other faggots behind the keys of a message board. A word rooted in hate, yet our genre still ignores it. –Mackelmore “Same Love”